Josh Tomlin has 10 wins through his first 17 career games (all starts) – the most by a Tribe pitcher in the last 90 years.

His 10 wins in 17 games surpasses the mark previously shared by Jaret Wright and Luis Tiant. Only five others have had as many as eight wins in their fist 17 career games.

On April 15 David Huff tossed a complete game against the Rangers. It was his second start of the season. Since that game he’s gone 11 straight starts without pitching into the 7th inning in any of them. Over the last 50 seasons, only four Tribe pitchers have had longer such streaks. 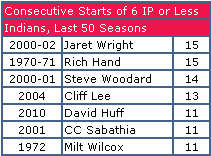 Essentially everything that could go wrong, has gone wrong. His accuracy has been shaky (28 K-27 BB during the streak). And he’s giving up the long ball (10 HR).

At this rate, its only a matter of time before someone is called up replace Huff. Carlos Carrasco is the most likely replacement, but keep an eye on Josh Tomlin who has a 2.81 ERA in 11 starts at Columbus.