Lonnie Chisenhall was called up before Monday’s game in Arizona to make his major league debut and responded with a 2-4 performance. He’s the 7th Indian to collect two hits in his debut since 1990 and the first with two hits and an RBI since Josh Bard in 2002.

And not to put too much pressure on the kid, but the last Tribe third baseman with two hits in his debut: future Hall of Fame Jim Thome

The reincarnation of Travis Hafner has driven in at least two runs in each of his last three games – the fourth such streak of his career and his first since since 2006.

Hafner is the 7th Tribesman in the past 50 years with at least four three-game multi-RBI streaks, but still well behind Manny Ramirez‘s record of 14.

The Tribe just keeps on rolling and this time doing it in dramatic fashion.

With the game tied in the bottom of the 9th, Carlos Santana belted a walk-off grand slam off Detroit’s Joaquin Benoit. It was the Tribe’s first walk-off in that fashion since Jim Thome (also against the Tigers) in 2002.

And of course, we can’t talk about walk-off grand slam’s without mentioning Bill Selby. With two outs, two strikes and the Tribe trailing 7-6 against arguably the greatest closer in baseball history Selby – who hit just 11 career home runs – hit one of the most improbably homers in Indians history. It was the first walk-off home run allowed by Mariano Rivera, and is still the only walk-off grand slam he has given up.

Santana’s blast was also just the 11th walk-off grand slam for the Tribe in the past 50 seasons. Here are the others, curtousy of baseball-reference:

Matt LaPorta found his swing in Columbus. Or at least his home run swing. 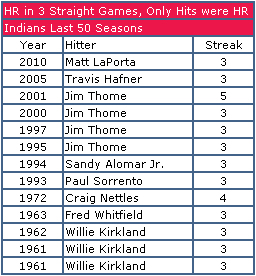 Since being recalled on on June 27, LaPorta is 5-17 in five games. Three of his five hits have been home runs – one each in his last three games.

A three-game home run streak is nothing unusual, Jhonny Peralta, Mark DeRosa and Travis Hafner each had one last year. But a streak in which the only hits are home runs is a little more rare.

Over the last 50 seasons only seven different Indians, not including LaPorta, had a home run streak of at least three games in which their only hits were homers. LaPorta’s streak is the first since Hafner in 2005. The king of the all-or-nothing streak is, of course, Jim Thome.

Russell Branyan made his 3,000th career plate appearance last night, qualifying him for baseball-reference’s list of all-time leaders for at-bats per home run. He checks in at 14th with a 14.9 mark, just behind Ted Williams. Of the 13 players in front of him, four are in the Hall of Fame (Ruth, Kiner, Killebrew and Williams).

Eight of the other nine belong in the Hall of Fame (unless steroids connections keep them out). The only non-HOFer of the group is Adam Dunn.

As an Indian, Branyan has homered once every 15.9 at-bats – ranking him 4th in team history behind Jim Thome, Albert Belle, and Manny Ramirez.